I’ve had a pretty crappy day (forgive me! but that’s the truth!) I drew 3 Pages of Shustah cards 2 nights ago, and contemplated them for a long while, but it wasn’t until this day unfolded that I understood their meaning; or of the 3 Gypsy cards that I drew this morning! Now that I get it, I will share what the cards were trying to say. 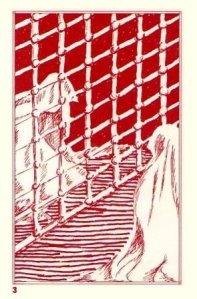 I remembered reading that the Red Fence, could mean that your guides and teachers hear you, and that your intuition is working big time, it guides you to listen to your inner wisdom. The second card, Gemini, could refer to  Mercury the messenger, and being ready for a message…or not being ready! I had received chills with these thoughts, and really thought I was on the right track; but I think sometimes there are multiple layers to the messages.

The Pale Horse, oft times signifies getting defensive, and rearing in fear and panic, as the horse is doing in the illustration. When one reacts out of their emotions and comes from fear, they aren’t able to think clearly and respond appropriately. It’s the flight or fight syndrome.

I originally thought that maybe just maybe, I was going to have a psychic/spiritual experience that I would end up being fearful of. That didn’t sit too well with me, as I have had many many encounters, and have not really ever been afraid…I welcome it! I ask for it!

Well, a more down to Earth way of reading these three cards is this:

The Red Fence can denote feeling separate from  someone, maybe someone that you love. It doesn’t necessarily have to mean being  physically separated. As you see in the illustration, they are near each other, and could actually talk to each other and reach out, but there’s a barrier between them for some reason. This is how I began to feel yesterday from my mate, sadly. We have just come together after a month apart, and after 4 days, the stress and the pressure finally upset the apple cart with my mate.

Gemini, the duality of Self; makes me think of Jekyll and Hyde. On the one hand, it said to me that I was seeing the “other”, darker side of my mate, and also the disagreement of  a couple as they turn in different directions from each other.

This is exactly what happened! My husband let his frustration spill out, using an unlikely topic such as yard work be the catalyst, when it’s really about all the pressure we’re under. But his blow up was pointed directly at me, blaming me for outrageous things. Nonsense!

What it accomplished was hurting me deeply, just before the people came to haul away my 40 year old baby grand piano. I went outside and cried and cried, I hate to admit. I didn’t do so well letting go when the moment came 😦

It set up a separateness between us, and of turning our backs on each other. It continued today where words were said that triggered me into a full scale “Pale Horse“! Saying that I was finished with all of this- and that I wanted out once we recovered financially… something that I really don’t want, but it came blurting out anyway…sigh* I reared up as though there was a poisonous snake in front of me, (and I was driving at the time!!! not good)

So we’re in the same space, barely speaking, facing different ways as we deal with pressing matters.

I am not a happy camper!

Then there’s the matter of the 3 Gypsy cards that I drew this morning. I had a feeling of what they were saying, and sadly turned out to be right. They were:

Today we had to drive all over the place, to deposit the money from the piano into the bank, then to go over to another bank and pay the mortgage (!!) and other such stops for a good part of the day. You’d think it would have been a day of relief that we were able to make some of our commitments, right?

Instead, we were both the Widower and the Widow, feeling totally alone and unsupported; just like the Red Fence, separated even though we were together.

These cards were a literal translation of the days events – totally alone in the same car, as we drove all over creation. Very sad. Maybe the only bright spot, if you can call it that, is that the Widower and the Widow face each other….they don’t really want to feel and act that way. It almost looks as though the Widower is waiting for her to come over to him and take his hand! it hasn’t happened yet….I am way too angry for that….at least for now. (and it takes an awful lot for me to get angry!!!)

Hopefully tomorrow’s draws will be lighter.

6 comments on “Really bad, sad day–and the Shustah cards and the Gypsy cards showed it in spades…”