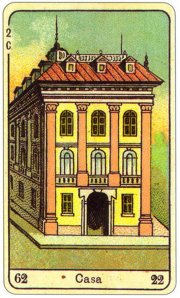 The majority of times, the card Militare will refer to someone who works in a uniform; like a police officer, a fireman, a grocery worker or a nurse! lol it often comes up as a lawyer as well.

But another meaning comes to mind, rather than the describing of a person.

The card may make reference to a difficult period for the consultant, fraught with obstacles of various kinds, but that may be overcome by gritting the teeth, they must appeal to their own considerable inner strength in the presence of this card.
In love it makes reference to a period of conflict and things hidden to the companion.

And here is what I immediately thought that the card meant this time.

Following Militare, is Imeneo which translates to ‘marriage’. Often this has to do with meetings & agreements,or the fulfillment of plans in the life of the consultant; but for me,at this moment, it’s the basic meaning.

Seeing the Casa following Imeneo, led me to believe that this was more personal and intimate than just meetings & agreements.

The cards this morning were telling me that I was going to go through a bit more discomfort where my relationship is concerned, and that I have to rely on my inner strength and grit my teeth!

AND…by afternoon, that was exactly the advice I needed to keep from getting into a major heated argument with my husband. I just kept remembering to stay strong, and not to get defensive – it was very dificult! One’s knee-jerk reaction is to retort when you’re feeling attacked, but I was determined to stay in listening mode as much as I could.

Another way these 3 cards could have been cold read, was that the Militare was a person who wears some kind of uniform, it’s usually a young man. This brought to mind my eldest son, who lives back in the states, and is the assistant manager in a grocery store 🙂 lol  Had I known better, I could have deduced that maybe he was going to get married! or that something important around his home was about to be realized.

We’ll see, there could be a second layer to this draw!

Actually, the 3rd layer would be the advice to “stay strong’ in the midst of challenges, because you are about to realize some of your plans concerning the family or home!